The World Beyond the Stairs 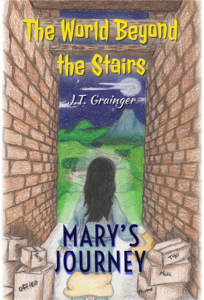 During a terrible ice storm, a woman named Mary Reynolds is separated from her husband and children for the night. In an effort to wait out the insufferable storm, she takes refuge at her grandmother’s house. Being unable to sleep, she finds herself in her grandmother’s basement and unwittingly opens an invisible doorway to a strange new world called Divinity.

In this wondrous land adults resemble children and all living creatures are able to communicate with one another through a special telepathic bond.

Unfortunately, Mary spends her first night in Divinity lost in the woods. The following morning, she awakes to find that she looks thirteen-years-old and has been given shelter by four young sisters named Angelaa, Peaany, Lizaa and Emmee.

At first, she assumes Divinity to be nothing more than a dream, but soon she realizes that not only is it real, it is not at all as it seems. In time, she learns that the world of Divinity is governed by an evil tyrant named Count Devursuraac who is said to possess godlike abilities and will stop at nothing to make sure his rule continues.

Nevertheless, Mary and her new companions must face great odds as they head towards the Northern Lands in search of a special device that may be able to get her back home.